Arx tarpeia Capitoli proxima ('the Tarpeian Rock is close to the Capitol'), a warning saying that from the top the fall to the bottom might happen 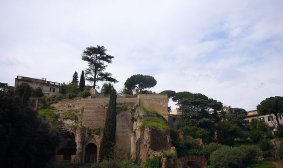 As mention on the Awards section, CERMA has been recognized, receiving several grants. In 2012, the manager filled a proposal towards OSEO : the MIOTHERIS project. This was induced by the experience gained and was dedicated to cumulate the treatements injecting a chemical in solution synergizing the effect of the direct physical action of the hot vaporized water.

The overall project was estimated at 20 Mo €, OSEO providing 8.7 Mo €, the remaining funded by the partners : Université de Besançon, Statice, Transgène, Pérouse. Due to the importance of the project, CERMA had to find a manager. Among the candidates presented by a Head hunter society, one seed to be the ideal one. As it is the normal way, the candidate was hired under a trial period contract.

During this trial period, it was obvious tha the candidate - even being an MD with years as the head of medical societies - and was not hired, this in a perfect legal procedure. Surprisingly, this individual started to sue CERMA in the court of prud'homme. As expected, the court rejected the demand. But, more surprising, the court of appeal in Chambéry found CERMA guilty [R.G. No 12/1336, 12 mars 2013]. The judge estimaating that the signature of the candidate under the libel "Lu et Approuvé" on the trial period contract, ...`that such a document is not the proof that the employee fully understand what it means and is not susceptible to assess the clear character and non équivoque dof the accptation `(sic)...

The argument brought by the judge is ludicrous knowing tha the person has a university degree. In this confusing situation potential investors, contributors to raise the remaining 11.3 Mo € were not very attracted.

Consequently, the strategy decided in emergency was to reaffect the internal cash to go in Cour de cassation. Finally, this juridictionbroke thr judgment of Chambéry [Arrêt No 1576 F-D, 23 septembre 2014]. It is instructive to carrefully read in the judgment the key argument : :

it is difficult to translate this gibberish piece of the judgment. In short it says :

From tht top of the tarpean roc the void was impressive. Last hope? successful issue ? an opprtunity was possible. Cerma had just signed an agreement with the University of Paris-Sud to inject a specific molecule using the CERMA technique. To do this, it was anticipated to test the new device designed by the partner Statice in Besançon, device realized in the ambit of the MIOTHERIS project.

At the critical moment, la BPI (OSEO) sumon CERMA to pay 220 K€, sum they provided in the envelop of 8.7 Mo€, 220 K€ tha should have been funded by CERMA. CERMA mention to BPI the opportunity brought up by the agreement with the University of Paris-Sud and asked for discussing the matter, an opportunity to valorize the prototypes that were elaborated for the MIOTHERIS project. BPI denied to open a discussion.