Pressure is the key word to spread out efficiently the agent delivered.
In the case of a chemical or radioactive (mostly in solution) a special
device providing the pressure has to be utilized.

Methyl_blue dye was injected with
the jack in agar gel (diam. 5 cm)

This kind of injection under high-pressure initiated 3 projects :

3. Project in collaboration with the Pharmacy department, Paris-Sud

The first one belongs to a resarch conducted at the Hospital Lyon-Sud by a team around Prof. Gerry Quash. One of the invention issued from this group is the MOTA/Methional molecule reported in several publications. The usual way to deliver this molecule during the test on animal (mice) was injecting it intraperitoneally to treat a tumor graftes on the flank of the animal. CERMA proposed the direct injection in the tumor. The major result is a diminution of the volume of the lesion with less amount of drug compared to intraperitoneal delivery. This encouraging outcome were the starting point and a second part was to assess the minimal quantity of molecule to reach remission of the lesion and to check the side effects primarily on the liver and kidney.

As far as the third one, it remained as a nice idea do promote the endeavour around the MIOTHERIS project. MIOTHERIS was designed to produces an original device to replace the "old jack" (fig. above) in a version allowing both type of injection: drug in solution and hot vaporized water (see Roca Tarpeya).

A first experiment with a liquid has been the injection of hydrogen peroxyde since free radicals are known to be highly toxic. Manipulating hydrogen peroxyde is not easy and slowly the idea of using hot water emerged.

Hot water provide naturally (physically) the pressure that ensure a good distribution of the heat through the tumor, the temperature distribution might be isotropic depending of the nature of the biological tissue and vascularization. From the beginning all the material of the device was carefully chosen to be compatible with Magnetic Resonance Imaging (MRI) since this technique offers a perfect way to measure the temperature non-invasively. 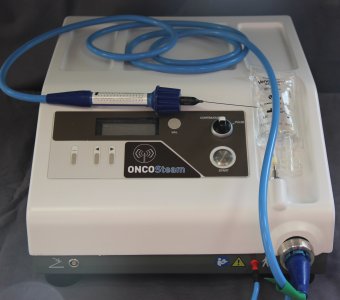